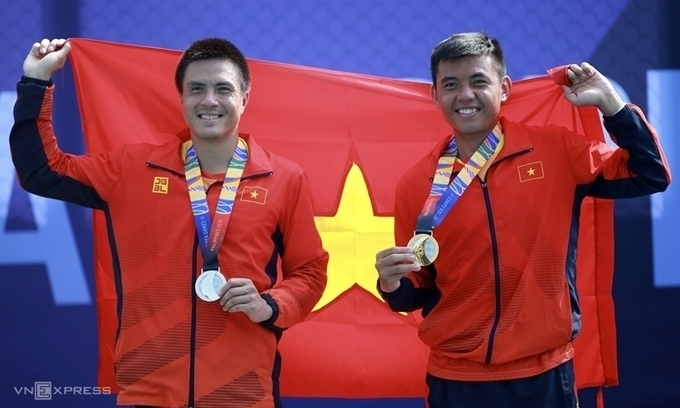 Nam enjoyed the historic victory with a score of 6-2 and 6-4 after two sets, leaving the silver medal to Daniel in the all-Vietnamese men’s singles final. Meanwhile, Savanna Ly Nguyen bagged a silver medal after losing both sets to Indonesia’s Sutjiadi Aldila.

In the doubles events, Nam and Le Quoc Khanh won a bronze medal in men’s category while Phan Thi Thanh Binh and Tran Thuy Thanh Truc bagged another in the women’s category.

Swimmer Le Nguyen Paul fetched a bronze medal in the men’s 100 m butterfly with the finshing time of 53.89 seconds, behind Singapore’s Schooling Joseph Isaac who won the gold medal for completing his race in 51.84 seconds.

Paul later joined his teammates Ngo Dinh Chuyen, Tran Hung Nguyen and Hoang Quy Phuoc to compete in the 4×100 m freestyle relay but were slower than Singapore and the Philippines to come in third place, adding another bronze Vietnam.

Nguyen Thi That added a gold medal in cycling women’s road event mass start individual final. The cycler from An Giang Province distanced herself from other rivals quite early in the race and completed the 108 km track in three hours 23 minutes and 57 seconds.

Ngo Phuong Mai snatched a bronze metal in women’s 3 m springboard diving with a total score of 241.25, below Malaysia’s Ng Yan Yee who came in first place with a total point of 298.90.

Vietnam has slipped down on the latest medal tally ranking for winning only 38 gold medals so far in the tournament. The host nation continues to top the list with 71 gold medals, followed by Indonesia with 40 gold medals.