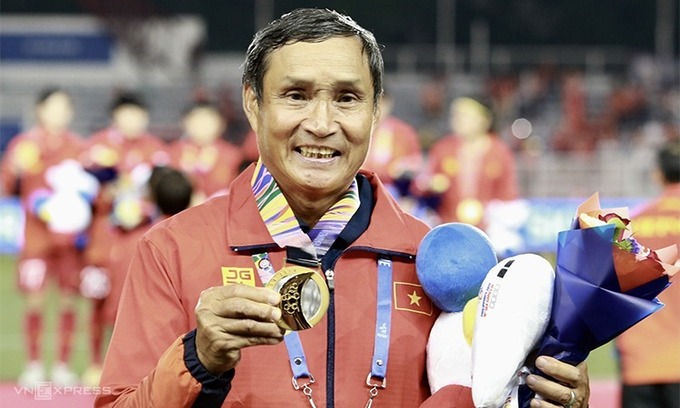 Coach Mai Duc Chung smiles broadly as he holds up his medal after the Vietnamese women’s football team defended their SEA Games gold with an extra time goal against Thailand on December 8, 2019. Photo by VnExpress/Lam Thoa.

Vietnamese women displayed tenacity and courage against Thailand to defend their football title Sunday, and immediately set sights on a World Cup ticket.

“I am touched and the emotions are surging as this is the sixth time the Vietnamese women’s football team have won the SEA Games gold medal. This is the team’s victory,” coach Mai Duc Chung told reporters after Vietnamese women won a hard fought final match against Thailand Sunday night.

“We still have to learn and improve a lot. Our immediate goal is to help the team win a ticket to the World Cup,” Chung said.

“After the semifinal, we had only two days to prepare for today’s final. We gave the players tonics, massages and adjusted their diet to improve their health and fitness. But the important factor was their strong spirit,” he added.

Although Vietnam repeatedly threatened Thailand’s penalty area, they could not score a goal in the 90 minutes of play. Their focused defense, thanks largely to keeper Tran Thi Kim Thanh putting on an amazing display, kept Thailand at bay.

In the second minute of extra time, Pham Hai Yen made fans across the nation scream in delight as she headed in from a close range, helping Vietnam defend their gold medal at this year’s SEA Games.

This is the sixth gold medal for Vietnamese women footballers at the SEA Games and the second one in a row.