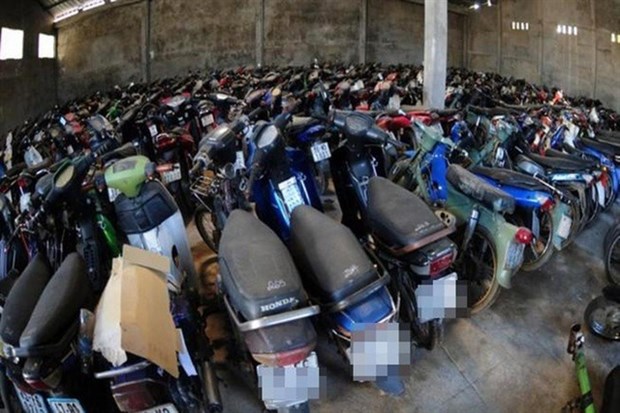 Police across the country stored nearly 137,000 unclaimed vehicles, including 722 cars, between 2013 and September 2019 (Photo: baogiaothong.vn)

Hanoi (VNS/VNA) – Vehicles seized for traffic
violations should be auctioned if the owners fail to come forward within 30
days instead of the current one year, the Ministry of Public Security said at a
recent meeting organised by the National Assembly’s Legal Affairs Committee in
Hanoi.

The move would free up warehouse space and avoid waste, participants heard.

Due to the long time in storage, 37,000 vehicles were damaged, he said.

Tien Phong (Vanguard) online newspaper quoted Ngoc as saying that 32 localities had to hire warehouses to store the seized vehicles because existing facilities could not meet the demand.

He recommended allowing the private sector to build facilities to store impounded vehicles and charge fees to reduce pressure on infrastructure investment for the State.

He also said the current legal procedures for auctioning vehicles are complicated, including verifying the owner, assessing the vehicle’s value, and ensuring the vehicle is not material evidence in a judicial proceeding.

Deputy Minister of Justice Dang Hoang Oanh said if owners fail to reclaim their vehicles within 30 days or if police are unable to establish who the owners are, the vehicles should be auctioned.

In response to the suggestions, Hoang Thanh Tung, chairman of the Legal Affairs Committee, agreed that steps are needed to deal with vehicles that are losing value due to the amount of time they are impounded.

If normal regulations are followed, it will take a lot of time to deal with these vehicles, he added.

Giang said these vehicles should be handled quickly, because they are costing the Stage budget storage fees.

He agreed with the suggestion to shorten the time for auctioning vehicles as well as simplifying legal procedures for auctions./.