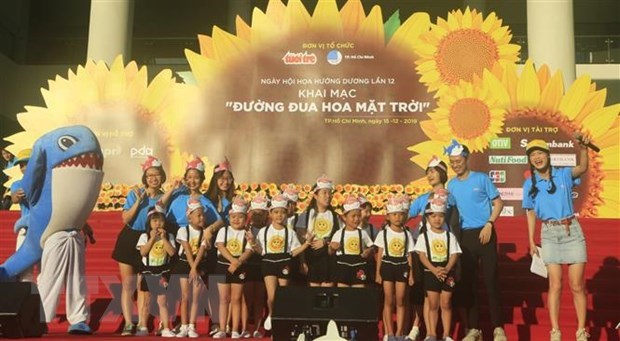 The Sunflower Festival on December 15 raised 1.5 billion VND for children with cancer in Vietnam (Photo: VNA)

HCM City (VNA) – A fund raising event in Ho Chi Minh City on December 15
raised 1.5 billion VND (over 64,400 USD) for children with cancer in the country.

The Sunflower Festival, the 12th of its kind, is among activities to mark the 12th year of the “Thuy’s Dream” programme held by the Vietnam Youth Union in coordination with the Tuoi Tre (Youth) newspaper.

The Thuy’s Dream programme for children with cancer is named after Le Thanh Thuy – a high school girl known and admired for her long fight against bone cancer prior to her death on November 2, 2007.

More than 3,000 people participated in the charity walk at the festival. For each participant, the Nutifood company donated 50,000 VND to help children cancer patients.

The programme also presented 160 scholarships to children who returned to school after treatment, and 1,000 gifts to children who are receiving treatment at 10 hospitals in HCM City, Da Nang, Thua Thien-Hue and Hanoi.

People can participate in the fund raising campaign via Facebook by drawing or making paper sunflowers with messages of wishes for children with cancer written on the works, before uploading the photos of them on Facebook with the hashtags #ngayhoihoahuongduong2019.

After 12 editions, the “Thuy’s Dream” programme has raised more than 45 billion VND for children with cancer./.