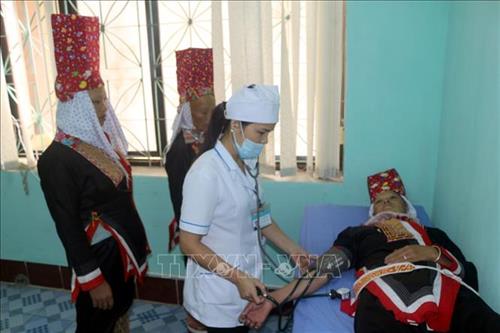 CAO BẰNG — The percentage of disadvantaged hamlets and communes in eight northeastern provinces has reduced 3 to 4 per cent per year since 2016, according to a report of Committee for Ethnic Minority Affairs.
The improvements have come since a socio-economic development programme in extremely disadvantaged communes of ethnic minority and mountainous areas was launched.
The Committee for Ethnic Minority Affairs and the provincial People’s Committee yesterday held a workshop to review four years of the project.
The programme has been implemented in 683 communes (32 per cent of total communes nationwide) in eight provinces of the northeastern area, namely Quảng Ninh, Hà Giang, Cao Bằng, Bắc Kạn, Tuyên Quang, Thái Nguyên, Lạng Sơn and Bắc Giang.
It has mobilised more than VNĐ7.3 trillion (nearly US$ $315 million) from the State and provincial budget and achieved positive results, contributing to hunger elimination, poverty reduction and improving the lives of ethnic minority people.
Income per capita of local people has increased by 1.5 to 2 times. Transport infrastructure, health care and education facilities have been upgraded. People in all the disadvantaged villages have received new plant and animal breeds.
Y Thông, deputy minister and vice chairman of Committee for Ethnic Minority Affairs, said some provinces have creative ideas to mobilise resources and encourage local people to supervise the implementation. However, some provinces have encountered difficulties.
The workshop aimed to review the efficiency of the programme and share exemplary poverty reduction models, which serves as a foundation to propose a framework for the national target programme on socio-economic development in ethnic minority and mountainous area in 2021-20, he said.
He said the programme “should be implemented in an easy, simple way and take advantage of the community along with empowering authorities at different levels”.
Participants agreed the national target programme must focus on improving people’s lives, offer them stable jobs and ensure income per capita will double by 2025 compared to 2020.
Ethnic minority and mountainous areas should be assisted to apply technology in production. — VNS