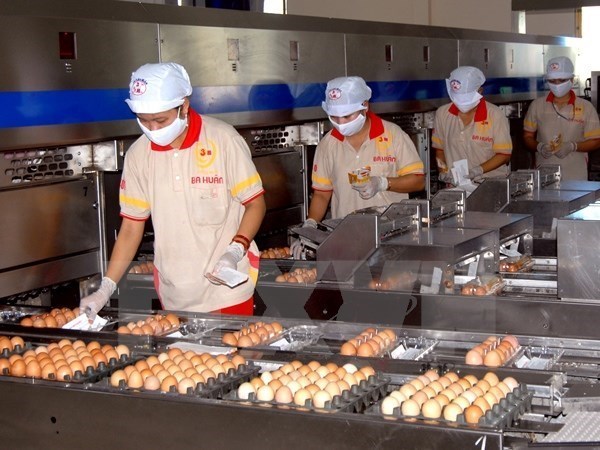 HCM CITY — The livestock and related sectors’ exports were worth US$855.4 million in the first nine months of the year and is expected to reach $1.2 billion for the year, according to the Ministry of Agriculture and Rural Development.
Phùng Đức Tiến, the deputy agriculture minister, said 8,800 tonnes of pork were exported for $44 million, nearly 17,800 tonnes of poultry meat for $18.8 million, 7.4 million poultry eggs for $1.4 million, nearly 23,000 tonnes of honey for $28.7 million in the period, besides, dairy products and animal feed and raw materials for making animal feed for $230 million and $516 million.
Việt Nam began exporting processed chicken in 2017 to Japan, one of the most demanding markets in the world, he said.
By the end of last year 1,080 tonnes of processed chicken had been shipped to Japan for nearly $ 6 million.
Total poultry meat exports last year topped 25,762 tonnes, 124 per cent more than in 2017.
Though volumes had not been large, these exports had greatly improved Việt Nam’s commercial reputation.
Nguyễn Xuân Dương, acting director of the Department of Livestock Husbandry, said they were proof of the efficiency of authorities, capability of livestock enterprises and the quality and safety of Vietnamese livestock products.
According to the ministry, nine Vietnamese companies have exported chicken eggs and salted eggs to Singapore, Hong Kong, Japan, Taiwan, Korea, Cambodia, Laos, and Australia, while one has exported fertilised chicken eggs to Myanmar.
Enterprises have also exported pigs and sucklings on the hoof and frozen sucklings to Hong Kong and Malaysia.
Honey exports increased strongly in 2008-18 to reach over 40,000 tonnes last year, with the main markets being the US, the EU, Japan, South Korea, and Thailand.
The country has exported dairy and dairy products to many countries and territories.
Last month TH Milk JSC became the first Vietnamese firm to export dairy products to China following a protocol signed between the two countries.
Dương said despite achievements, the sector faced challenges due to its small scale, poor management, low productivity, poor control of diseases, and a lack of linkages between farming, slaughtering and processing in the production chain.
There were also problems with food safety, hygiene and disease control, he added.
The Strategies for Livestock Development by 2020 and 2030 envisages focusing on breeding pigs, poultry, cows for meat, and dairy cows, which could help the country achieve its potential and expand exports.
To achieve its targets, livestock production will be developed by modernising and industrialising farms.
The industry has to reorganise slaughtering and processing to ensure hygiene, safety and environmental protection.
Enhancing linkages between businesses, co-operatives, business groups, and small farmers and breeders would be very important for developing the sector in a sustainable manner, Tiến said.
The Law on Animal Husbandry, which comes into effect on January 1 next year, would help build a closed animal husbandry industry, increasing exports of livestock products, he added. — VNS