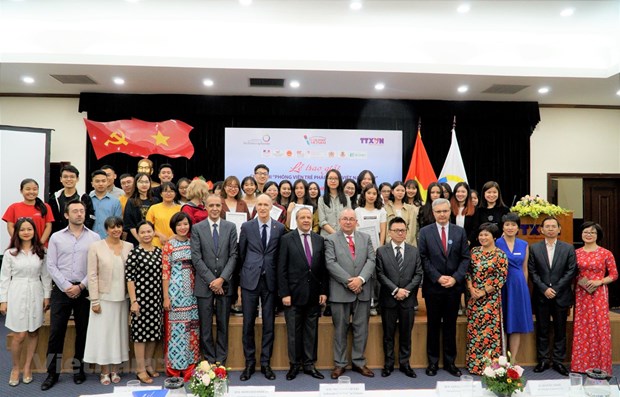 Contestants and delegates at the award ceremony (Photo: VNA)

Hanoi (VNA) – The award presentation
ceremony for the Young Francophones Reporters–Vietnam 2019 contest was held in Hanoi on November 8.

This is a writing contest in French held by Le Courrier du Vietnam, a weekly French-language newspaper under the Vietnam News Agency, under the sponsor of the International Organisation of La Francophonie (OIF), the embassies of France, Switzerland and Morocco, the Francophone Universities Association (AUF), the Wallonie-Bruxelles Delegation in Hanoi, and the Hanoi Eye Hospital No2.

Entitled The Power of Words, the contest aims to encourage young people to use the beauty and richness of the French language to write about the country.

The best 20 entries were published on Le Courrier du Vietnam online at https://www.lecourrier.vn.

Addressing the ceremony, Deputy Director General of the Vietnam News Agency Le Quoc Minh affirmed that the VNA supports the development of the French language in Vietnam, noting the contest contributed to enhancing the unity of Francophone partners in Vietnam.

Editor-in-chief of Le Courrier du Vietnam, Nguyen Thu Ha, who is a co-organiser of the event, said this year, the number of candidates increased significantly, and the quality of the works was also better than previous years.

The fourth contest’s results met all its targets of promoting the movement of teaching and learning French in Vietnam, and especially, it creates a playground for young people studying French, said Ha./.