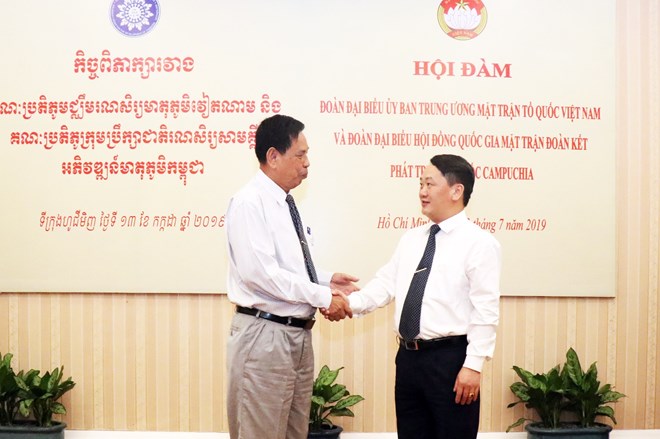 HCM City (VNA) – Vice President and Secretary General of
the Vietnam Fatherland Front (VFF) Central Committee Hau A Lenh has hailed great
contributions of the Solidarity Front for the Development of Cambodian
Motherland (SFDCM) to the implementation of cooperation programmes agreed by
the two countries’ leaders.

Speaking at the talks with the SFDCM delegation led by Vice President and Secretary General of the SFDCM National Council Nhem Valy in Ho Chi Minh City on July 13, Lenh said the cooperation between the VFF and the SFDCM has contributed to strengthening the traditional friendship, special solidarity and comprehensive cooperation between Vietnam and Cambodia.

He thanked the SFDCM for its close coordination with the Vietnamese Ministry of National Defence in implementing a bilateral agreement on building and upgrading Vietnam-Cambodia friendship monuments.

The VFF is willing to cooperate with and support the organisation of international conferences that the SFDCM will host in 2020, Lenh affirmed.

For his part, Nhem Valy briefed on the SFDCM’s performance and revealed its tasks in the coming time, including the organisation of a meeting of the Chairpersons of Vietnamese, Lao, Cambodian fronts scheduled to take place in 2020.

He expressed his hope that the VFF will continue to support the SFDCM in the coming time, while affirming that the upgrading and building of the friendship monuments in Cambodia demonstrate the Cambodian people’s gratitude and tribute to Vietnamese volunteer soldiers and experts who laid down their lives to help them escape from the Pol Pot genocidal regime.

During the talk, the participants reviewed the implementation of the front cooperation agreements between the two sides; and the agreement signed in 2017 on building a Vietnam-Cambodia border of peace, friendship, cooperation for mutual development.

They also discussed coordination plans in organising international conferences that the two sides will host in the coming time, and agreed to establish working groups to connect and support each other in the work.

Later on the day, the SFDCM delegation paid a courtesy visit to leaders of Ho Chi Minh City.-VNA