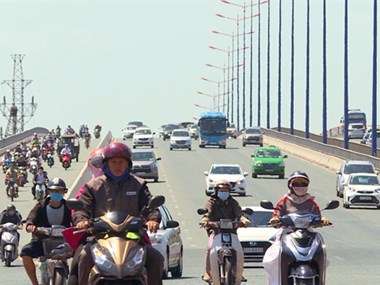 HCM City (VNS/VNA) – Urban heat islands in Ho Chi Minh City and other large
cities in Vietnam are causing heat waves with some of the highest recorded
temperatures ever in the country, affecting public health.

The Centre for Regional and Urban Studies said this year is forecast to be the hottest ever since temperatures began to be recorded in 1880.

In large cities like HCM City and Hanoi, temperatures reached 40-50 degrees Celsius in March and April.

Dr. Duong Thi Thuy Nga, head of the department of environmental informatics at the Vietnam National University HCM City-University of Science, said temperatures in several central areas in HCM City were higher than in the outskirts and rural areas.

Speaking at a forum on urban heat islands held in the city earlier this week, she said: “Because the former has a lower vegetation cover index than the latter.”

The increasing number of people and vehicles and the CO2 they discharge contribute to urban heat islands, she added.

A study done by researchers at the HCM City University of Technology found that the surface temperature difference in the city had increased between 1995 and 2015 and in that period the total area of heat islands has increased four-fold.

An extreme heat island in the inner city has an area approximately 18 percent of the city.

The researchers extracted the surface temperatures in the city’s north from Landsat satellite.

Nga said: “The urban heat island has affected people’s health and economic development and tourism in the city. A clean and beautiful city with a lot of green spaces is always attractive.”

Moreover, when it is very hot, people feel tired and their productivity is reduced, she said.

A system for monitoring and analysing surface temperatures in the city should be set up for authorities and people to realize the changes and seek solutions, she added.

Pham Tran Hai, deputy head of the department of urban management studies at the HCM City Institute for Development Studies, said many countries in the world face the problem but have found solutions.

Singapore, for example, is increasing its open green spaces and planting more trees along high-speed roads and streets to reduce urban temperatures, he said.

The green coverage rate in Singapore is 56 percent while in HCM City it is 18 percent, he said.

In May several public buses with plants installed on their roofs, claimed to be the first in Asia, began plying there.

It has been subsidising the cost of these roofs and walls by 50 percent since 2009, he said.

Green roofs should be installed on buildings in HCM City too because they also help reduce the rain flowing down into the streets, he added.-VNS/VNA