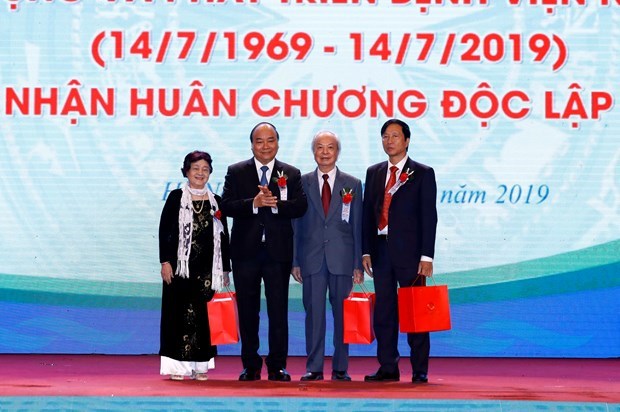 Prime Minister Nguyen Xuan Phuc (second from left) presents gifts to former leaders of the hospital (Photo: VNA)
Hanoi (VNA) – The Central Pediatrics Hospital must
always be a top trusted referral in this field throughout the country so as to
become an advanced and high-quality establishment in the region and the world
over, Prime Minister Nguyen Xuan Phuc said on July 13.

At a ceremony to celebrate the Hanoi-based hospital’s 50th founding anniversary, the Government leader further asked its doctors, nurses and workers to unceasingly improve the quality of health checks and treatments, and access advanced technologies so as to meet the requirement for the health care for children in the current time.

At the same time, they should also intensify international co-operation, broaden exchanges of experiences with their peers in those countries with developed medicine and having good training and research work to improve the quality of their services.

PM Phuc also visited a number of patients being hospitalized there, and expressed gratitude to the government and people of Sweden for their help in building the hospital for Vietnam in the difficult time, saying he hopes for further support from foreign countries and international organizations.

The hospital was established on July 14, 1969 at a decision by then Prime Minister Pham Van Dong. Starting with some hundreds of doctors and medical workers, the establishment has now become a modern hospital with a 2,000-strong staff and 2,000 beds as well as a scientific research centre.

Last year, the hospital provided over 1 million health checks and more than 100,000 treatments for children.-VNA