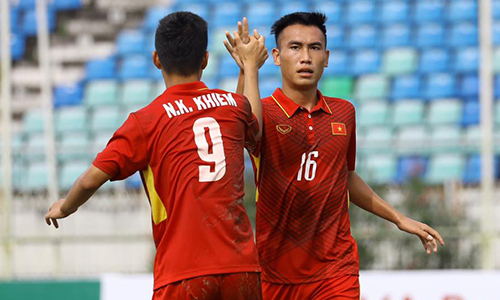 Vietnamese players at the AFF Cup U18 2017. Photo by VnExpress/Duc Dong.

There will be 12 countries from Southeast Asia and the Pacific, with Vietnam drawn in the tough group B with the two strongest teams, Australia and Thailand, besides Cambodia, Singapore and Malaysia.

Group A will have Myanmar, Indonesia, Laos, Timor Leste, the Philippines, and Brunei.

Vietnam will play Malaysia on August 7, Australia on the 9th, Singapore on the 11th, Thailand on the 13th, and Cambodia on the 15th. All the matches will be played at Thong Nhat Stadium in HCMC except the one against Singapore, which will be played in Binh Duong.

The team had a training camp at the Promotion Fund of Vietnamese Football Talent academy in the northern Hung Yen Province and are now in Japan to prepare for the event.

Malaysia won the tournament in 2018 in Indonesia, with Vietnam losing in the group stage.